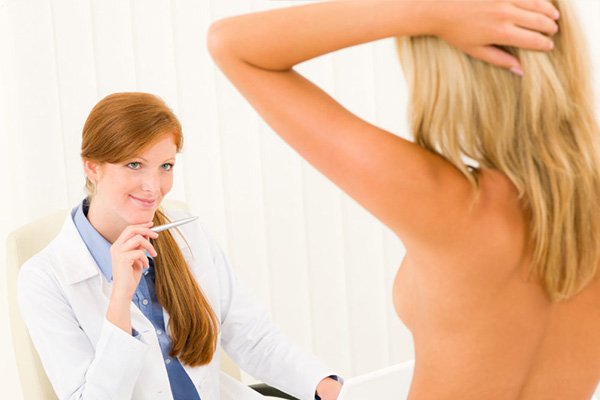 What is breast reconstruction?

Many women who have a mastectomy—surgery to remove an entire breast to treat or prevent breast cancer—have the option of having the shape of the removed breast rebuilt.

In a final stage of breast reconstruction, a nipple and areola may be re-created on the reconstructed breast, if these were not preserved during the mastectomy.

Sometimes breast reconstruction surgery includes surgery on the other, or contralateral, breast so that the two breasts will match in size and shape.

How do surgeons use implants to reconstruct a woman’s breast?

Implants are inserted underneath the skin or chest muscle following the mastectomy. (Most mastectomies are performed using a technique called skin-sparing mastectomy, in which much of the breast skin is saved for use in reconstructing the breast.)

Implants are usually placed as part of a two-stage procedure.

In the first stage, the surgeon places a device, called a tissue expander, under the skin that is left after the mastectomy or under the chest muscle (1,2). The expander is slowly filled with saline during periodic visits to the doctor after surgery.

In the second stage, after the chest tissue has relaxed and healed enough, the expander is removed and replaced with an implant. The chest tissue is usually ready for the implant 2 to 6 months after mastectomy.

In some cases, the implant can be placed in the breast during the same surgery as the mastectomy—that is, a tissue expander is not used to prepare for the implant (3).

How do surgeons use tissue from a woman’s own body to reconstruct the breast?

In autologous tissue reconstruction, a piece of tissue containing skin, fat, blood vessels, and sometimes muscle is taken from elsewhere in a woman’s body and used to rebuild the breast. This piece of tissue is called a flap.

Depending on their source, flaps can be pedicled or free.

Abdominal and back flaps include:

Flaps taken from the thigh or buttocks are used for women who have had previous major abdominal surgery or who don’t have enough abdominal tissue to reconstruct a breast. These types of flaps are free flaps. With these flaps an implant is often used as well to provide sufficient breast volume.

How do surgeons reconstruct the nipple and areola?

After the chest heals from reconstruction surgery and the position of the breast mound on the chest wall has had time to stabilize, a surgeon can reconstruct the nipple and areola. Usually, the new nipple is created by cutting and moving small pieces of skin from the reconstructed breast to the nipple site and shaping them into a new nipple. A few months after nipple reconstruction, the surgeon can re-create the areola. This is usually done using tattoo ink. However, in some cases, skin grafts may be taken from the groin or abdomen and attached to the breast to create an areola at the time of the nipple reconstruction (1).

Some women who do not have surgical nipple reconstruction may consider getting a realistic picture of a nipple created on the reconstructed breast from a tattoo artist who specializes in 3-D nipple tattooing.

A mastectomy that preserves a woman’s own nipple and areola, called nipple-sparing mastectomy, may be an option for some women, depending on the size and location of the breast cancer and the shape and size of the breasts (4,5).

What factors can affect the timing of breast reconstruction?

Another factor is the type of breast cancer. Women with inflammatory breast cancer usually require more extensive skin removal. This can make immediate reconstruction more challenging, so it may be recommended that reconstruction be delayed until after completion of adjuvant therapy.

Even if a woman is a candidate for immediate reconstruction, she may choose delayed reconstruction. For instance, some women prefer not to consider what type of reconstruction to have until after they have recovered from their mastectomy and subsequent adjuvant treatment. Women who delay reconstruction (or choose not to undergo the procedure at all) can use external breast prostheses, or breast forms, to give the appearance of breasts.

What factors can affect the choice of breast reconstruction method?

Several factors can influence the type of reconstructive surgery a woman chooses. These include the size and shape of the breast that is being rebuilt, the woman’s age and health, her history of past surgeries, surgical risk factors (for example, smoking history and obesity), the availability of autologous tissue, and the location of the tumor in the breast (2,6). Women who have had past abdominal surgery may not be candidates for an abdominally based flap reconstruction.

Each type of reconstruction has factors that a woman should think about before making a decision. Some of the more common considerations are listed below.

More information about implants can be found on FDA’s Breast Implants page.

All women who undergo mastectomy for breast cancer experience varying degrees of breast numbness and loss of sensation (feeling) because nerves that provide sensation to the breast are cut when breast tissue is removed during surgery. However, a woman may regain some sensation as the severed nerves grow and regenerate, and breast surgeons continue to make technical advances that can spare or repair damage to nerves.

Any type of breast reconstruction can fail if healing does not occur properly. In these cases, the implant or flap will have to be removed. If an implant reconstruction fails, a woman can usually have a second reconstruction using an alternative approach.

The Women’s Health and Cancer Rights Act of 1998 (WHCRA) is a federal law that requires group health plans and health insurance companies that offer mastectomy coverage to also pay for reconstructive surgery after mastectomy. This coverage must include all stages of reconstruction and surgery to achieve symmetry between the breasts, breast prostheses, and treatment of complications that result from the mastectomy, including lymphedema. More information about WHCRA is available from the Department of Labor and the Centers for Medicare & Medicaid Services.

Some health plans sponsored by religious organizations and some government health plans may be exempt from WHCRA. Also, WHCRA does not apply to Medicare and Medicaid. However, Medicare may cover breast reconstruction surgery as well as external breast prostheses (including a post-surgical bra) after a medically necessary mastectomy.

Medicaid benefits vary by state; a woman should contact her state Medicaid office for information on whether, and to what extent, breast reconstruction is covered.

A woman considering breast reconstruction may want to discuss costs and health insurance coverage with her doctor and insurance company before choosing to have the surgery. Some insurance companies require a second opinion before they will agree to pay for a surgery.

What type of follow-up care and rehabilitation is needed after breast reconstruction?

Any type of reconstruction increases the number of side effects a woman may experience compared with those after a mastectomy alone. A woman’s medical team will watch her closely for complications, some of which can occur months or even years after surgery (1,2,10).

Women who have either autologous tissue or implant-based reconstruction may benefit from physical therapy to improve or maintain shoulder range of motion or help them recover from weakness experienced at the site from which the donor tissue was taken, such as abdominal weakness (11,12). A physical therapist can help a woman use exercises to regain strength, adjust to new physical limitations, and figure out the safest ways to perform everyday activities.

Does breast reconstruction affect the ability to check for breast cancer recurrence?

Studies have shown that breast reconstruction does not increase the chances of breast cancer coming back or make it harder to check for recurrence with mammography (13).

A woman with a breast implant should tell the radiology technician about her implant before she has a mammogram. Special procedures may be necessary to improve the accuracy of the mammogram and to avoid damaging the implant.

More information about mammograms can be found in the NCI fact sheet Mammograms.

What are some new developments in breast reconstruction after mastectomy?

Oncoplastic surgery. In general, women who have lumpectomy or partial mastectomy for early-stage breast cancer do not have reconstruction. However, for some of these women the surgeon may use plastic surgery techniques to reshape the breast at the time of cancer surgery. This type of breast-conserving surgery, called oncoplastic surgery, may use local tissue rearrangement, reconstruction through breast reduction surgery, or transfer of tissue flaps. Long-term outcomes of this type of surgery are comparable to those for standard breast-conserving surgery (14).

Autologous fat grafting. A newer type of breast reconstruction technique involves the transfer of fat tissue from one part of the body (usually the thighs, abdomen, or buttocks) to the reconstructed breast. The fat tissue is harvested by liposuction, washed, and liquified so that it can be injected into the area of interest. Fat grafting is mainly used to correct deformities and asymmetries that may appear after breast reconstruction. It is also sometimes used to reconstruct an entire breast. Although concern has been raised about the lack of long-term outcome studies, this technique is considered safe (1,6).

McAnaw MB, Harris KW. The role of physical therapy in the rehabilitation of patients with mastectomy and breast reconstruction. Breast Disease 2002; 16:163–174.[PubMed Abstract]